Susan at the Junos

I was thrilled to play one of the coolest gigs of my life…so far…Back-up bassoon for the Arkells at the 2015 Juno Awards!!!! Yeah, so that bassoonist who scored all the camera time??? This girl. 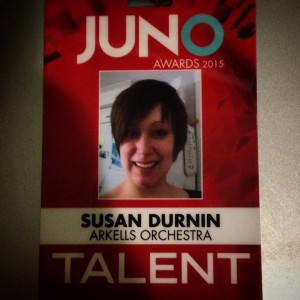 Exciting moments of the Junos for the entire Orchestra? Watching Arkells win Rock Album of the Year 5 minutes before taking the stage to perform Come to Light with them!!!! (Their other nomination was group of the year…which they won at the Gala on Saturday night.) Needless to say, they are a kick-ass band and it was frigging amazing to be on stage with them.
So the gig…what was it like? Well, to share an insider secret…big productions and movies/TV filming is all the same…Hurry up to wait. You end up with a really early call time, you doll yourself up, then hope the hairspray will hold for the next 3 hours!!! BUT, just because it isn’t the glamorous life that people imagine, it doesn’t mean that it wasn’t the coolest weekend of my life!!! 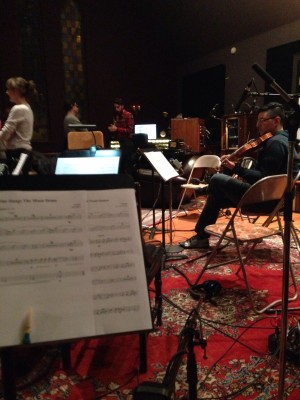 Ok…here is the insider timeline:

We all met up in a secret location…also known as Catherine North Studios…a really adorable converted church that is now a recording studio. We were awed by the table-size original Nintendo controllers in the basement and the STFU light that was noise sensitive…both items are on my Birthday wish list…just saying. We laid down the orchestra part of the song so we could avoid the nightmare of trying to mic acoustic instruments in an arena with crowds, electric instruments and a 3 minute set up time. It isn’t cheating to prerecord the orchestra to make it easier to balance it with a rock band. (and we totally played live on stage.) 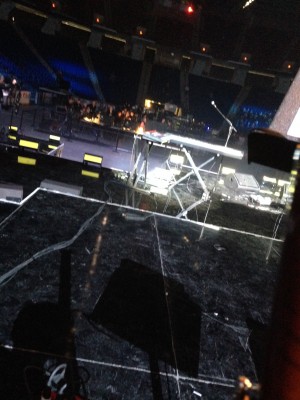 We all arrived at the arena, got our super awesome accreditation badges (see above) aaaaand sat around waiting. Well, the wait wasn’t so bad as I had tons of time to make reeds while listening to Sam Roberts Band soundcheck live. I mean, I’m not complaining about my reed-making soundtrack it was an awesome morning. We went on stage shortly after Sam Roberts and Lights, and this rehearsal was a tech/camera rehearsal. The camera guys were running choreography, the sound guys were fiddling with levels, the lighting people were weaving magic…We ran Come to Light 3 or 4 times and then we were done…so we trundled off to another gig in Burlington.

PS. Much Music spoiled the “secret orchestra” by tweeting it after seeing us rehearse. Thanks…we even had a “reveal” planned for the show…pshaw. 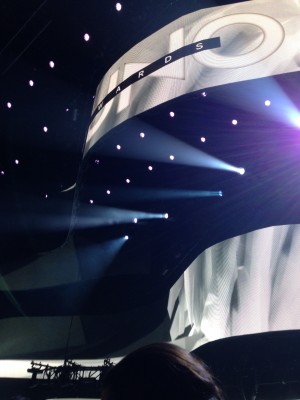 We showed up bright and early in Hamilton, put our gowns on….and waited. The dress rehearsal started around noonish and we took the stage shortly thereafter. This rehearsal unlike the tech rehearsal was a straight timing run-through and quick turn-over practice for the tech guys. I think it ran smoothly, except that our riser had magically doubled in height and there was no step up…and now we were in heels and long gowns….but that was quickly sorted out with a gear box and some helpful stage hands offering an arm. The only other glitch in our song’s dress rehearsal was that the 2 vocal microphones for the lead singers were forgotten…but as everyone knows…that’s what dress rehearsals are for!!!

After we left the stage, we had 5 hours to kill before our evening call time…so clearly it was time for hanging out and orchestra gossip over lunch. 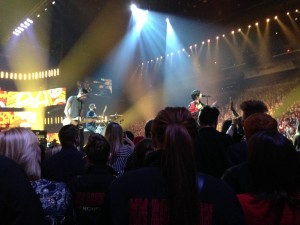 Evening hit and we headed back to the arena, where we awkwardly ended up getting past the roadblocks and wandering down the street that cars were driving to get people to the red carpet…making me feel both silly and famous at the same time…I don’t understand why the stage door is always so awkward to get to!!!

Anyways, more hanging around waiting ensued…then we walked on stage to the roar of thousands of people…and it was the best feeling in the whole entire world. Now I know why I’ve always wanted to be a rock star…because the thrill and energy of the crowd is UNBELIEVABLE! 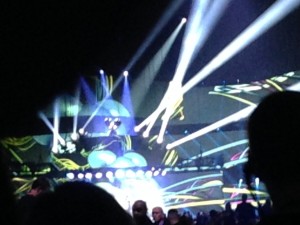 When we got off stage, we then proceeded directly to the “mosh pit” (I use the term lightly…there was no moshing at the Junos….) and watched the rest of the show, which was incredible. I can’t decide if I was more excited to see Deadmau5 or Alanis Morissette…maybe it was when Alanis walked within 5 feet of me after winning her lifetime achievement award? Or maybe it was being in the rain of confetti at the end of the performance by Lights… Or was it seeing a random Toronto-friend backstage and taking a “Juno’s selfie?” I’m going with the whole experience was amazing and I’m hooked and want to play big rock shows ALL THE TIME NOW!!!! 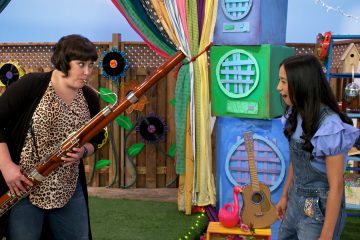 Susan and DFM were featured on Backyard Beats, an award-winning TV series for children that introduces all sorts of instruments.